Tim lives in North Ridge with his wife, Beth, who serves as Executive Director of the Scholarship Fund of Alexandria, and their three daughters, Isabella, Kathleen and Ava, all of whom attend Alexandria City Public Schools. 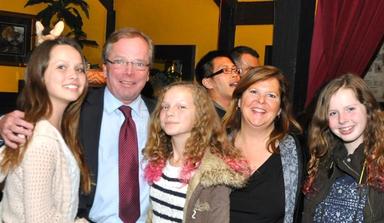 ​Tim serves on the Washington Council of Governments’ Chesapeake Bay and Water Resources Policy Committee and on Alexandria’s Children, Youth and Families Collaboration Commission.  He is a member of the Board of Directors of Stop Child Abuse Now (SCAN) of Northern Virginia.

Tim is an Executive Vice President of Capitol Strategies.  Most of his lobbying practice has been on behalf of public sector clients, including the Washington State Department of Transportation, the Ports of Tacoma and Everett, Washington, and transit agencies in the Phoenix and Seattle regions.  Prior to joining Capitol Strategies, Tim served as Vice President and General Counsel of Denny Miller Associates for 29 years.

​Tim is the Chair of the Washington Area Transit Industry Representatives Task Force, the Chair of the Public Ferry Coalition, and the Vice Chair and Chair-Elect of the Coalition for America’s Gateways and Trade Corridors, which promotes federal investment in freight mobility projects.  He was the founding Chair of the Northern Virginia Streetcar Coalition.

Before joining Denny Miller Associates, Tim served as a legislative assistant for a Congresswoman and a Senator and as legislative director of New Directions, a citizens' lobby on global issues.  Tim is an attorney, admitted to the Washington State Bar, and a former Coast Guard Officer.  Numerous newspapers and magazines have published his free-lance articles. ​